Unacceptable: Unit testing will take 20 years to catch on

During the Typemock Partnership Academy Panel in Oslo, I had a very strange feeling coming from Uncle Bob, when asked “what is the state of unit testing” that was the feeling of acceptance, but I felt a tingle of consent perhaps a bite of giving in. 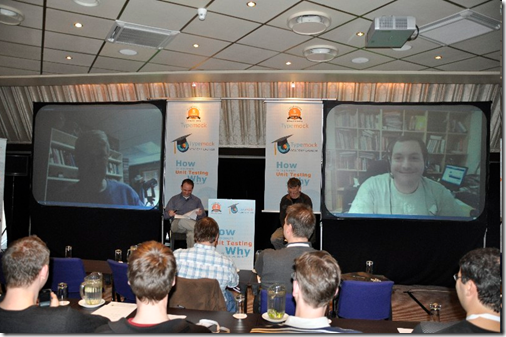 Gil Zilberfeld although quiet, nicely pointed out: “I feel like I am listening to a Buddha Guru”

I feel very different, I know that 90% of the developers don’t unit test. That is 9 out of every 10 developers, that is outrageous, 10 years of unit testing and  only 10% of the developers – get it. Some developers we have interviewed said “Yup, I tried unit-testing, it is just a way for management to make us write twice as much code in half the time, I will never do it again”

As Roy Osherove pointed out, there is talk of dividing the developers into 2 groups, “Us” – who unit test, and “Them” who don’t. “We won’t even try to teach them, its their loss.” I can see where this comes from, we would prefer to hire only developers who unit test their code. But the truth is, in hindsight, the majority of the developers working at Typemock, didn’t know how to unit test and learnt it on the job. I actually think that there is already a separation, There always has been one, between the purist (Whether it is Strict-Object-Oriented, UML-Modeling, TDD, craftsmanship you name it) to the pragmatic developer: The highest level of joy, is seeing our product being used, so we need to understand our users, create something that is useful and joyful for them, with the lowest cost of ownership. We will use any tool/process/trick to make this happen.

I had a great discussion with Richard Fennell from Black-Marble over breakfast. Richard told me that Management in companies are focusing at investing millions of dollars on the “user-tests” and see those tests as the ultimate QA solution, while hardly any invest in unit-testing. “We have no quality problem, because we have a QA team”. Now the QA market is a huge and very strong market and unit-testing is a threat to that market. I have heard many QA people, thinking about how this will make them lose their jobs. Richard talked about the normal software developer, who doesn’t have the passion that we have, that see their job as “a job” and don’t spend their free time going to conferences and writing an open source project, they just want to get the job done.

Perhaps this easy-going, let’s wait this out, attitude, is what’s hindering the acceptance of unit testing in the world. It is clear to me that 20 years is too long for this to happen, I know that there is another way, that technology and business value have the power to make that transformation become real.