While developing the Metric Dashboard, I on purposely did not write any unit tests. I wanted to feel and remember what is like to develop without unit test and see how to write the unit tests after the deed 🙂

The first issue that I had with developing is that I found myself running the code- either with the debugger or without – much more then usual – lets call this Manual Unit Testing . There where times when I know that I was wasting my time, and manually rerunning the same scenarios over and over again. I felt the urge to write a unit test as I knew that I was wasting my time. But the feeling that I had was always: I am nearly there, I’m just about to fix the bug, so why waste time writing a unit test. Most times, I wasn’t there and it took many runs and setups just to reach the correct scenario. 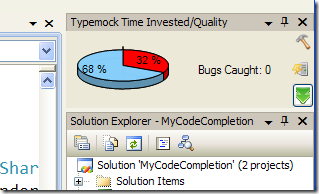 That is 32% of my time in the debugger and running the application, and 68% of my time authoring production code.

Seeing this is a great indicator that I can do better. because after all this work, I still have ZERO tests to cover me.

I am going to start writing unit tests, but beforehand lets give a short architecture overview.

This component is the reporting component and allows managers and team leader to see how unit testing helped the team (by catching bugs early on) and by spending less time doing manual unit testing. Using this dashboard we can see how much time is being put into writing unit tests and how useful it really is.

This component tracks the unit testing effort per each solution and saves it locally and on the Typemock Server. Using this each develop can see how much time is being invested in unit tests and the immediate benefits.

What do the colors mean?
The colors are:

Where do I start?

So now that I want to get going, my biggest question is where do I start?