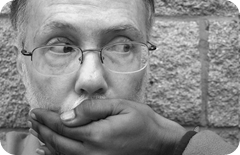 One of the hardest things for me to do as a manager is to shut up!

When I see a flaw in our product or web site or in a plan session, I have to give my thoughts and ideas in order to make the best product.

Although I am making the product better, I am de-motivating the team. There is a simple equation that I forget to calculate when I give my (brilliant) ideas. I must calculate the value added to the product versus the motivation of the team. I am finding this very hard to do, but I must learn to shut up more often.