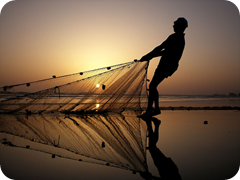 Now that the company is in integrity it is easier to fail fast and to fix our broken processes. As Johanna Rothman says Graceful Degradation is Not What We Want; Quick Failure is Better

Not only is it easy to do it, we don’t even need a manager to do this as the actual team member can learn how to do this themselves.

Our marketing team was not ready for this and was suddenly was under a lot of pressure to release the new version too, so the new version was not released publicly until our marketing guys could upload it and make the correct changes.
As I have been reading Lean and Kanban lately, I felt that this was a sign of a push company and not a pull one.

So in our weekly meeting, we created a little paper plane factory. Roy, Adi and Dror sat in a line and had to create paper planes and throw them at Sivan. Roy had to do the basic fold, Adi had the hard work of folding the plane and Dror had to throw the plane on Sivan. 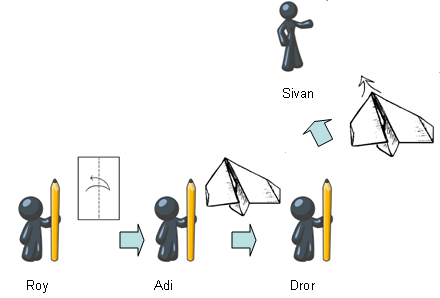 On the first round we did this without any constraints and Roy folded all his papers before Adi could make 2 planes, he was then bored and started snoozing. Adi was under a lot of pressure and just couldn’t keep up, while Dror just had to wait and throw the plane, so he waited. 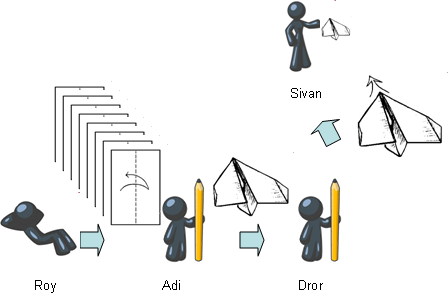 We had a small discussion about this, about how Roy left a pile and then was bored and how Adi was pressured and how Dror was just waiting.

Then we did the same thing, but this time no-one was allowed to proceed unless the next person was ready to take the plane away from you.

This time Roy had to do a lot of waiting.  We managed to make the same amount of planes, but with the constraints we found the bottleneck MUCH faster! Roy immediately pointed out that he was waiting. He even offered to help Adi (Which for the games sake, I didn’t allow). We also saw that the time that each plane was in the system stayed constant allowing us to manage it better.
It was eye opening. Having the constraint immediately made a more efficient team as one member helped with the ‘longer/harder tasks’. Another thing I noticed is that when you are stuck (because of the constraint) upstream, you are more inclined to help them when you are stuck downstream and are waiting for other people to finish.

During the Integrity management meeting the development team didn’t commit or even say that he would complete the version, so the marketing team had no idea that it would be coming. It is important to say in the integrity meeting about things that you will be passing to another person/team to make sure that they will have the capacity to handle it, keeping us leaner and having less waste.