Here is a summary of what others say: 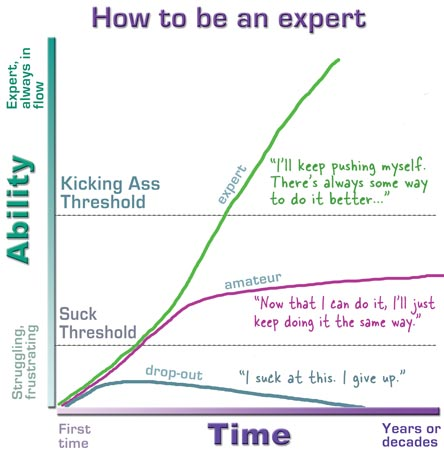 I found a great post on how to become an expert from the Creating Passionate Users blog. (the graph is from that post)

Most of us want to practice the things we’re already good at, and avoid the things we suck at. We stay average or intermediate amateurs forever.

In this study they take chess players and research how to become an expert player. It comes down to the fact that both a professional and a non-professional player do the same amount of analysis (how many future moves are calculated) and they both spend the same amount of time playing – so they practiced the same. It is just that the expert always raised the bar and practiced harder and harder games.

The bottom line, is that we must leave our comfort zone. We are comfortable avoiding the things we suck at. We must tackling those parts. As a manager we must notice the places where developers are avoiding and challenge them to do them.